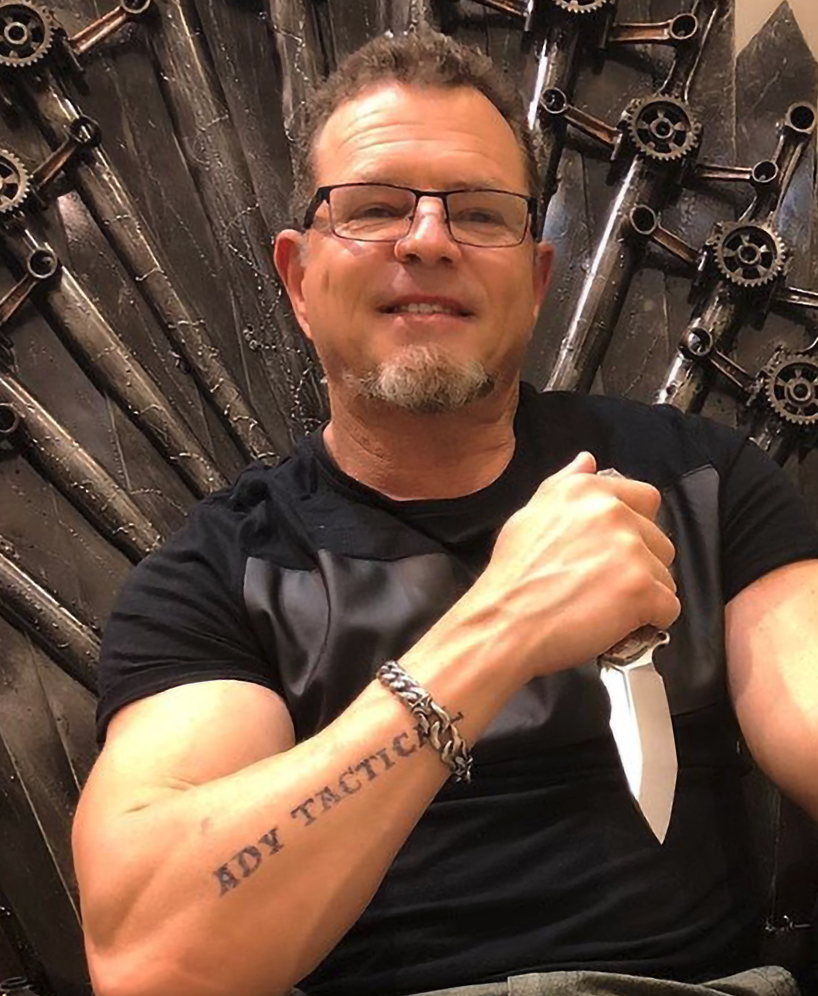 Andre De Villers — is a knifemaker with a recognizable design style from South Africa, founder, and owner of ADV Tactical. From the name of his company, it follows that Andre specializes in large tactical knives, weighty folders, and fixed blade knives.

Andre was born and raised in Pietermaritzburg, the second-largest city in South Africa. However, by European standards, the city is small — its population at best reaches half a million people. The sights of the city are a huge brick town hall and a Gandhi monument, Gandhi was removed from the train at Pietermaritzburg due to racial discrimination. Beautiful landscapes surround the city. The Green Drakensberg Mountains are nearby, and in the east is the Natal coast of the Indian Ocean. Of course, the inhabitants of Pietermaritzburg live in close contact with nature, they love hiking, fishing, and hunting. The de Villers family also loved to shoot at live targets. Andre's father was an avid hunter and he passed on his love of shooting to his son.

Andre de Villers loved weapons from childhood. He started hunting as a boy, and when he grew up, he realized that a good hunter needs a good knife. Since he was not satisfied with the assortment of stores, Andre decided to make a powerful fixed blade tactician for himself. The debut was so successful that de Villers senior asked his son to make a hunting knife for him too. Andre created his first knives in 1990 when he was a schoolboy. De Villers attended Weston Agricultural College and moved to Mooi River. But neither agriculture nor cattle breeding enticed a fellow. All his thoughts were only about the knives.

Andre began to independently, step by step, comprehend the basics of knife making. As a hunter, he most of all valued practicality in knives, the beauty of the design was just a logical continuation of functionality. Andre combined these two qualities in his most recognizable model Butcher. The knife resembles a miniature butcher's cleaver. The original shape of the model, high quality, and modest price brought the author significant success among collectors and knife lovers.

The Butcher received the greatest popularity in the modification of a flipper with a frame lock. But the master also made variations with a fixed blade and folders that open with a thumb stud. His butchers vary in steel finish (from classic satin to acid stonewash) and handle decoration (from titanium to ivory). Most of the knives of this model have a wide massive blade, but there are also mini-modifications of 3 inches. For the blade, the master most often uses steels D2, S35vn, and N690. However, there are custom samples from Damascus.

Of course, Andre's creativity is not limited to Butcher alone. The Ronin and DF Frag flippers with the Clip-Point profile have proven themselves well. Tactical multitools are also very popular. They and the tactical bottle opener, made in the form of a Spartan helmet, can be used as knuckles in self-defense. The new Scavenger folder is interesting for its design. The handle of it repeats the bones of the spine. Death has always inspired De Villers.

Today Andre de Villiers is one of the most famous knifemakers in Africa and a member of the South African Knife Guild. The master describes his knives as super tough with extreme functions. Andre guarantees the quality of the ADV tacticals, insists on their practical application, but does not forget about the attractive design. As you know, beauty must save the world.

You can buy a South African knife from Andre de Villers at the Maria Stalina Knives store.